KSmarty’s love of music started with his mother sending him to piano lessons at a very young age which he enjoyed only to a certain extent as he preferred to play by ear rather than learning to read the music. As a result he has a keen ear for picking up sound and reproducing which has led him to be able to play other instruments by ear eg rhythm and bass guitars.

In his teenage years, KSmarty formed a band with a few friends, practicing in one of homes but never performed live until many, many years later playing keyboards and singing in a one off performance in 2012.

Being the youngest sibling, KSmarty’s music influences came from his brother and sister and this was mainly Reggae Roots and culture from the car stereo and also Lovers Rock. Eventually he would use their stereo with turntable and start building his own record collection.

KSmarty started work in the 1980s, started building in his own stereo at home for personal use and began to get bookings to play at events. After years of borrowing equipment, his brother-in-law gave him a tensai amplifier and, with a few friends, they went into his garage and built their own speaker boxes. That was the start of his Intruder sound system in the early 1990s, which played at anniversaries, parties, weddings and other events around the North West London area, culminating in a successful self promoted Fancy Dress Ball in 2013.

KSmarty spent many years listening to live sound system clash events, working with and assisting other sound systems. Their use of vinyl records gave him an opportunity to appreciate music he had heard years before from the 1960s and 1970s - real ‘Rusty Dusty’ reggae music.  However, as he is used to playing music at many corporate functions, he has a wide range in his collection, capable of satisfying any audience and these you may hear in his Four Seasons shows. 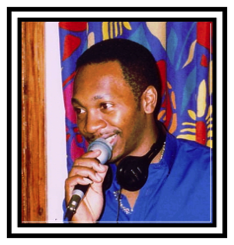